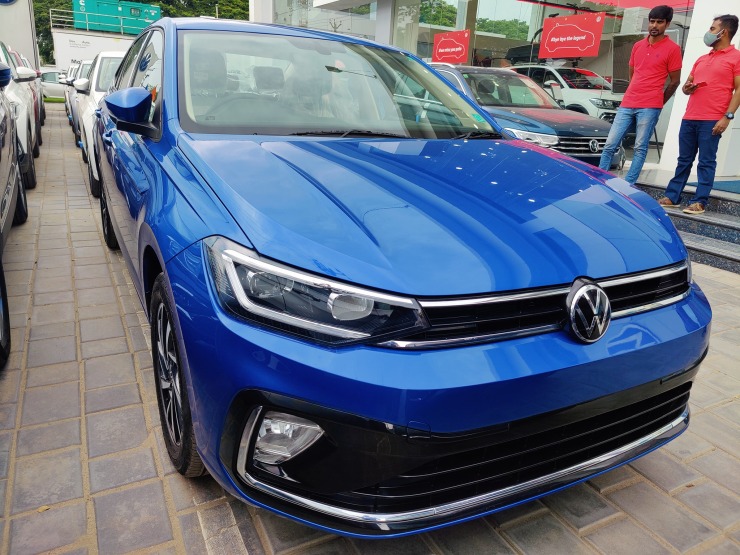 Volkswagen will launch the Virtus mid-size sedan on 9th June in the Indian market. The manufacturer has started dispatching the new Virtus to its dealership. Here, are some images of the Virtus parked at a dealership. The pre-bookings for the sedan are already open. You can book your Virtus through Volkswagen’s website or by visiting a dealership.

The images are shared on Facebook by Sathya Sachien. As we can see in the pictures, the Virtus is finished in a nice shade of blue. Volkswagen calls this shade “Rising Blue Metallic”. Other colours on offer are Reflex Silver, Wild Cherry Red, Carbon Steel Grey, Candy White and Curcuma Yellow.

The mid-size sedan will be offered in two turbocharged petrol engines. These engines and gearboxes are shared with the Taigun, Skoda Kushaq and Slavia. There is a 1.0-litre, three-cylinder TSI engine that produces 115 PS of max power and 178 Nm of peak torque. It comes mated to a 6-speed manual gearbox or a 6-speed torque converter automatic transmission.

Then there is the 1.5-litre, four-cylinder TSI EVO engine. It puts out 150 PS of max power and 250 Nm of peak torque. It will come mated to only a 7-speed DSG dual-clutch automatic transmission. Some people would be disappointed with the choice of transmission that Volkswagen opted for. Hardcore enthusiasts still want to buy a powerful engine with a manual gearbox. Such people might consider the Slavia because it offers the same 1.5 TSI engine with a 6-speed manual gearbox.

The Performance Line is expected to have two variants. There is GT and GT Plus. It would be a more sporty trim and will come only with the 1.5 TSI engine. The GT Line will also come with blacked-out elements. So, there would be blacked-out outside rearview mirrors, blacked-out alloy wheels and a roof. There would be a subtle boot-lid spoiler, red inserts in the cabin and red brake calipers.

Volkswagen Virtus will come with a lot of equipment. There would be up to 6 airbags, Electronic Stability Control, Multi Collision Brakes, LED projector headlamps with LED Daytime Running Lamps, split LED tail lamps, 3 headrests at the rear with 3 seatbelts, and rear parking sensors with a reverse parking camera.