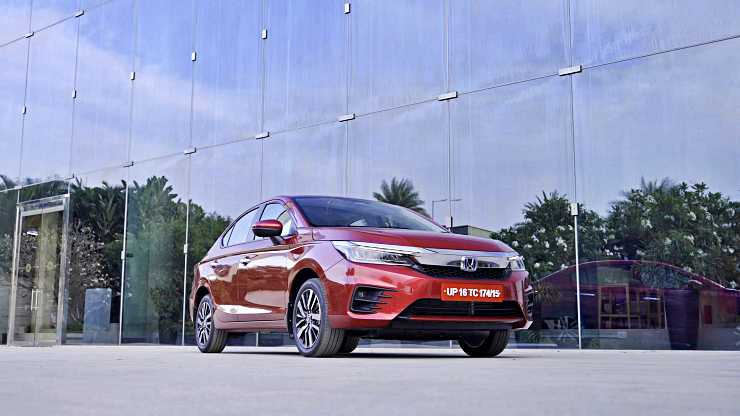 With the Indian government pushing for alternative fuel options in India, Nitin Gadkari recently started moving around in a hydrogen-powered Toyota Mirai. Honda Cars India recently introduced the all-new City e:HEV, which has become the first mass-segment full-hybrid car in the country. Honda Cars India team met Nitin Gadkari at his residence to show him the new fuel-efficient sedan.

It was a proud moment for us at Honda Cars India Ltd, when Mr. Nitin Gadkari, Hon’ble Minister of Road Transport and Highways, Government of India, took time out of his busy schedule to meet our officials and check out the new Honda City e:HEV. (1/2) pic.twitter.com/Zjpsr6kDFY

Honda’s social media handles have put out pictures where Nitin Gadkari is checking out the brand-new Honda City e:HEV. Mr Kunal Behl, VP, Marketing and Sales, Honda Cars India was present with his colleagues during the meeting.

Also read: World’s most EXPENSIVE car number plate: Even Ambanis will be STUNNED

We can see a white colored Honda City e:HEV at the meeting. While the new Honda City looks exactly the same as the petrol variant, there are a few subtle changes that make it look sportier compared to the standard model.

Honda recently announced the price of the new City e:HEV. At a price of Rs 19.5 lakh, the new City Hybrid is the most affordable sedan with a strong hybrid system. However, it remains much more expensive than the other cars in the segment.

Honda, however, says that it has received a massive response from the market. Without sharing the number of bookings, Honda said that it will take more than six months to complete the current orders.

The all-new City Hybrid gets a complex hybrid system that runs on parallel and series hybrid modes as per the load and demand from the car. The 1.5-litre petrol engine works on the Atkinson cycle, which makes it more efficient.

Honda City returns a maximum of 26.5 km/l of claimed fuel efficiency. We drove the car around Bangalore and got more than 22 km/l. You can watch the video review of Honda City e:HEV on our channel.

The central government wants to reduce the import fuel bills in India. While the center is pushing for alternative fuels like ethanol and hydrogen, such engines will take time to reach the Indian market.

The hybrid is the easiest and most practical answer to increase the fuel efficiency of cars. However, hybrid vehicles do not get any tax benefits like electric cars in India.

The government wants to develop pollution-free green hydrogen as an alternative fuel for vehicles in the future, for which the Toyota Mirai is used as the model for the pilot project.

Gadkari feels that hydrogen-powered vehicles are the future of mobility in the country, along with electric vehicles, because of which cars like Toyota Mirai will arrive in the Indian car market very soon.