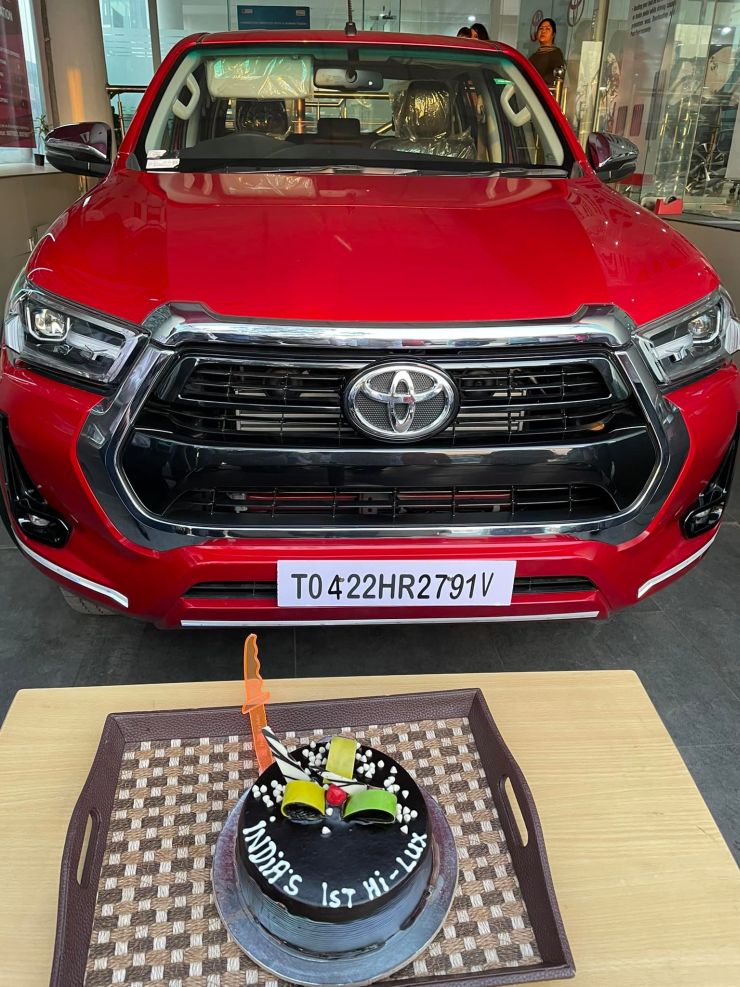 After a long wait, Toyota finally launched the Hilux pick-up truck in the Indian market. The prices for the pick-up truck were announced last month. Toyota Hilux competes with Isuzu V-Cross in the segment. Toyota had started accepting the bookings for Hilux and surprisingly the response from the customers was so overwhelming that Toyota had to stop taking bookings. The pick-up truck has already started reaching dealerships and it looks like the delivery for the same has also started. Here we have images of India’s first Toyota Hilux pick-up truck that has been delivered to the customer.

The images of the all-new Toyota Hilux getting delivered to the customer has been shared on 4×4 India Facebook group by Manav Maini, Details regarding the variant is not available in the post. Toyota Hilux is a popular pick-up truck around the world. You may remember it from the popular episode of British Auto show Top Gear where the hosts try to destroy a Hilux. Just like the Fortuner and Innova Crysta that we currently have in India, Hilux is also popular among buyers around the world for its reliability. Although it is competing with Isuzu V-Cross, Toyota Hilux is priced on the higher side. Price for Toyota Hilux pick-up truck starts from Rs 33.99 lakh, ex-showroom which is too expensive for a pick up truck.

Unlike Toyota Fortuner, Hilux is only offered with a diesel engine. It comes with both manual and automatic transmissions. It uses the same 2.8-litre four-cylinder diesel engine that generates a maximum power of 204 PS and peak torque of 420 Nm with the manual transmission and 500 Nm with the automatic transmission. In comparison to Fortuner, Hilux gets 4×4 as a standard feature. There is a high and low-range transfer case as well. Toyota also offers the A-TRAC traction control system with the pick-up truck and there are additional features like downhill assist control.

Its rival the Isuzu V-Cross is available in both 2WD and 4WD options. The price for Isuzu V-Cross starts at Rs 16.98 lakh, ex-showroom. Coming back to Hilux, Toyota is offering seven airbags as standard. Other features like vehicle stability control and switchable traction control are also available with the Hilux. There are two drive modes in the vehicle that changes the steering settings as well. The Hilux offers 700mm water wading capability and also gets Limited Slip Differential. There is an electronic diff lock and a rear diff lock for extreme off-roading.