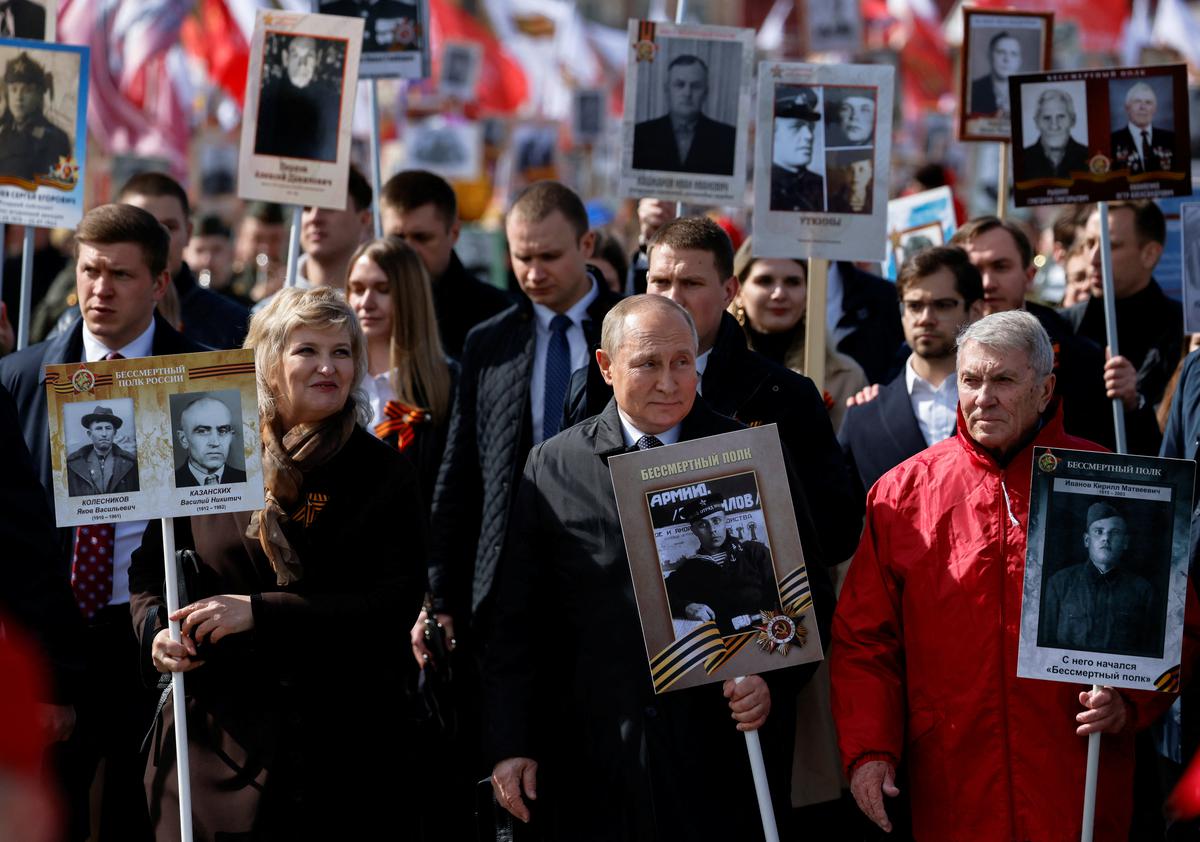 Ukraine’s vital Black Sea port of Odesa came under repeated missile attack, including from some hypersonic missiles, after Russia marked its biggest patriotic holiday without giving new information about the war. Also, a Ukrainian official said the bodies of 44 civilians were found in the rubble of a building destroyed by Russia in March.

The civilians were inside a five-story building that collapsed in Izyum in the Kharkiv region, said Oleh Synehubov, the head of Kharkiv’s regional administration.

“This is another horrible war crime of the Russian occupiers against the civilian population!” he said in a social media message announcing the deaths.

Izyum is an eastern Ukrainian city that Russia has been holding as a key front-line node. Synehubov did not say specifically where the building was.

Earlier, the Ukrainian military said Russian forces fired seven missiles from the air at Odesa, hitting a shopping center and a warehouse. One person was killed and five were wounded, the military said.

As part of the barrage, a Russian supersonic bomber fired three hypersonic missiles, according to the Center for Defense Strategies, a Ukrainian think tank tracking the war. The center identified the weapons used as Kinzhal, or “Dagger,” hypersonic air-to-surface missiles.

The Kinzhal can fly at five times the speed of sound and has a range of 2,000 kilometers (1,240 miles). Using advanced guided missiles allows Russia to fire from aircraft at a distance without being in Ukrainian air space and exposed to potential anti-aircraft fire.

But Ukrainian, British and American officials warn Russia is rapidly expending its stock of precision weapons and may not be able to quickly build more, raising the risk of more imprecise rockets being used as the conflict grinds on. That could result in more civilian deaths and other collateral damage.

The strikes came after Russian President Vladimir Putin marked his country’s biggest patriotic holiday without being able to boast of major new battlefield successes. He watched troops march in formation and military hardware roll by in a Victory Day parade on Moscow’s Red Square in a celebration of the Soviet Union’s role in the 1945 defeat of Nazi Germany.

Russian President Vladimir Putin holds a portrait of his father, war veteran Vladimir Spiridonovich Putin, as he takes part in the Immortal Regiment march on Victory Day, which marks the 77th anniversary of the victory over Nazi Germany in World War Two, in central Moscow, Russia on May 9, 2022.
| Photo Credit: Reuters

Many Western analysts had expected Mr. Putin to use Victory Day holiday to trumpet some kind of victory in Ukraine or announce an escalation, but he did neither. Instead, he sought to justify the war again as a necessary response to what he portrayed as a hostile Ukraine.

Mr. Putin has long bristled at NATO’s creep eastward into former Soviet republics. Ukraine and its Western allies have denied the country posed any threat.

“The danger was rising by the day,” Mr. Putin said. “Russia has given a preemptive response to aggression. It was forced, timely, and the only correct decision.”

Intense fighting also raged in Ukraine’s east. And Russian forces sought to end the resistance of Ukrainian defenders making their last stand at a steel plant in Mariupol.

One of the Ukrainian fighters holding out at the steel plant said they were still defending the city. Valeri Paditel, who heads the border guards in the Donetsk region, said the fighters were “doing everything to make those who defend the city in the future proud.”

The Ukrainian military warned Tuesday that Russia could target the country’s chemical industries. The claim wasn’t immediately explained in the report. But Russian shelling has previously targeted oil depots and other industrial sites during the war.

One of the ships seen in the images from Planet Labs PBC appeared to be a landing craft. Ukraine has repeatedly struck Russian positions there recently, suggesting Russian forces may be trying to re-staff or remove personnel from the Black Sea island.

Satellite view shows smoke rising over Snake Island, Ukraine amid Russia’s attack on the country, on May 8, 2022 in this handout image. Photo: Planet Labs PBC/Handout via Reuters

After unexpectedly fierce resistance forced the Kremlin to abandon its effort to storm Kyiv over a month ago, Moscow’s forces have concentrated on capturing the Donbas, Ukraine’s eastern industrial region.

But the fighting there has been a back-and-forth, village-by-village slog. Some analysts suggested Mr. Putin might declare the fighting a war, not just a “special military operation,” and order a nationwide mobilization, with a call-up of reserves, to fight an extended conflict.

In the end, he gave no signal as to where the war is headed or how he might intend to salvage it. Specifically, he left unanswered the question of whether or how Russia will marshal more forces for a continuing war.

Nigel Gould Davies, former British ambassador to Belarus, said: “Russia has not won this war. It’s starting to lose it.”

He said that unless Russia has a major breakthrough, “the balance of advantages will shift steadily in favor of Ukraine, especially as Ukraine gets access to growing volumes of increasingly sophisticated Western military equipment.”

As Mr. Putin laid a wreath in Moscow, air raid sirens echoed again in the Ukrainian capital. But Ukrainian President Volodymyr Zelensky declared in his own Victory Day address that his country would eventually defeat the Russians.

“Very soon there will be two Victory Days in Ukraine,” he said in a video. He added: “We are fighting for freedom, for our children, and therefore we will win.”

A Zelensky adviser interpreted Putin’s speech as indicating that Russia has no interest in escalating the war through the use of nuclear weapons or direct engagement with NATO.

Russia has about 97 battalion tactical groups in Ukraine, largely in the east and the south, a slight increase over last week, according to a senior U.S. official, speaking on condition of anonymity to discuss the Pentagon’s assessment. Each unit has roughly 1,000 troops, according to the Pentagon.

The official said that overall, the Russian effort in the Donbas hasn’t achieved any significant progress in recent days and continues to face stiff resistance from Ukrainian forces.

Satellite photos showed intense fires in Russian-held territory in southern Ukraine on Monday. A cause for the fires wasn’t immediately clear. However, Planet Labs images showed thick smoke rising to the east of Vasylivka, a city which is flanked by nature preserves.

‘No petrol in any station, no cash in ATMs’: Pakistan’s Mohammad Hafeez | World News

‘Our relations with India not moving forward, but one day…’: Pak minister | World News