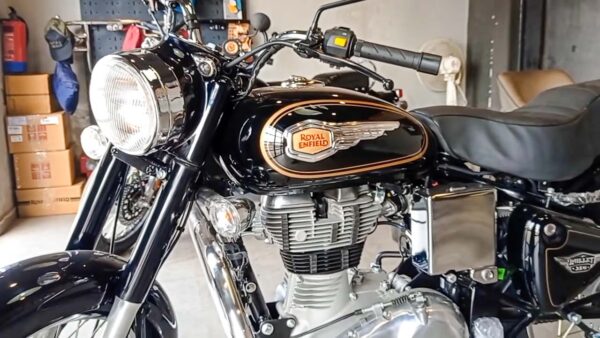 Similar to price hikes announced by other manufacturers, revised pricing of Bullet 350 is likely due to increase in input costs

Royal Enfield recently increased prices Across the range including Bullet 350. Due to supply chain disruption caused by the pandemic and subsequent shortage of parts and materials, there has been a significant increase in input costs. In the past two years, most OEMs have announced multiple price hikes.

Bullet 350 runs on 19-inch wheels at both ends. Suspension system comprises 35mm telescopic forks at front and twin rear shock absorbers with 5-step adjustable preload. Braking system has a 280mm disc at front and 153mm drum brake at rear. The bike is offered with single-channel ABS.

Among Royal Enfield’s 350cc motorcycles, Bullet is usually placed at second or third spot in terms of sales. While Classic 350 leads by a significant margin, the second spot is a clash between Bullet and Meteor 350. In March 2022, Bullet was ahead of Meteor with sales of 8,283 units. Meteor was third with sales of 6,589 units.

An interesting thing to note is that Bullet 350’s popularity is limited to the domestic market. unlike other Royal Enfield bikes that are preferred in overseas markers as well, Bullet 350 does not have any numbers to show in exports.

One of the most iconic motorcycles in the country, Bullet is preferred for its dominating street presence, classic styling and thumping exhaust note. To enhance overall user experience, Royal Enfield will soon launch the next-gen version of Bullet. It will be based on the new 350cc platform and the new J-series engine.

Meteor 350 was the first Royal Enfield bike based on the new 350cc platform. The updates were later introduced with Classic 350 as well. The new 350cc engine delivers slightly more power at 20.2 bhp. However, torque output is down by 1 Nm, as compared to the existing engine used with Bullet.

Royal Enfield’s new 350cc platform is superior in several aspects including improved handling and control. As Meteor and Classic 350 users have reported, vibrations are almost non-existent even at high speeds. These benefits will be available with the new-gen Bullet as well.

Visually, new-gen Bullet will continue with its retro styling and liberal use of chrome. Specific components like headlamp and taillamp will be updated. Some new colors could also be introduced. Riding ergonomics will be largely the same as earlier with scooped out rider seat, pulled-back handlebar and centrally placed footpegs. There is unlikely to be any major dimensional changes to Bullet that is 2170 mm long and 810 mm wide.