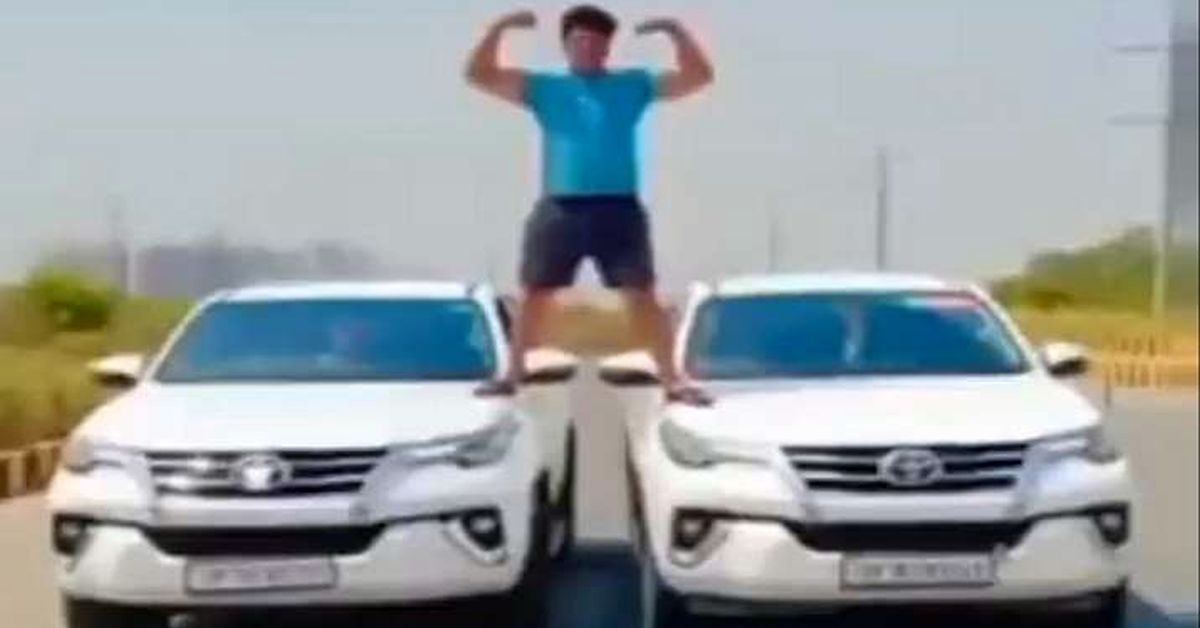 Noida Police have arrested a 21-year old man after a video of him doing stunts on two SUVs became viral. The man identified as Rajiv shared a video on social platforms where he can be seen standing on two moving Toyota Fortuner SUVs.

According to the social media comments, Rajiv was recreating the stunt of Ajay Devgn from the movies Golmaal and Phool Aur Kaante. Rajiv was standing on the bonnet of the two white coloured Toyota Fortuner SUVs as both the vehicles continued moving forward in the video.

Also read: Tourists in a Toyota Fortuner throw garbage: Bikers stop them & make them take it back (Video)

“Based on the video, the man was traced. He has been identified as Rajiv (21), a resident of Sorakha village and has been arrested. The two SUVs and a motorcycle which was used in making the video have been impounded,”

The police have seized both the SUVs and have arrested the man who was performing these stunts as well. The police say that one of the Toyota Fortuners belongs to Rajiv’s family. While he had taken the other Toyota Fortuner from a relative to make this video. Rajiv is not employed but belongs to a well-to-do family. The purpose of making the video is to make it viral on social media platforms.

After the arrest, the police registered a case under the Motor Vehicles Act. The whole police action was applauded by Gautam Buddh Nagar Police Commissioner Alok Singh who welcomed the prompt actions of the local police. Alok Singh also urged parents and guardians of children and youngsters to pay attention to what they are doing.

Illegal to do stunts on the public roads

Doing any kind of stunts on public roads is highly illegal and the violators can even go to jail along with paying massive fines. Doing stunts on public roads can land you in a spot due to various reasons. If anyone wants to practice stunting or want to record videos, it should be done on private property such as race tracks and even farmhouses. Also, one should take note that such stunts are extremely dangerous.

The man standing in the car could have slipped easily. In the movies, most actors use stuntmen and body double to do such extreme stunts. Even the stuntmen are properly harnessed for safety.

With the arrival of digital challan systems, the cops are much more vigilant nowadays. The police departments have started accepting digital evidence like photographs and videos of the incidents. Even though the influencer girl was not using a vehicle, she was disrupting the traffic and that is breaking the law.

Most metropolitan cities now have a network of CCTV that is closely monitored by a team of police personnel. The police issue challan based on the violation by tracking the registration number.