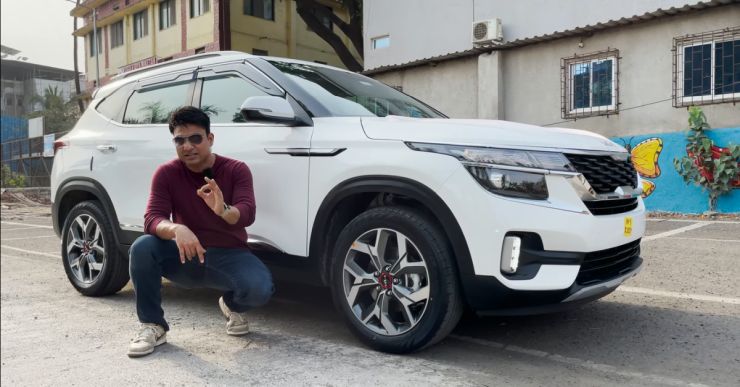 Kia Seltos is one of the popular mid size SUV in its segment. It competes with cars like Hyundai Creta, Tata Harrier in the segment. It became popular among buyers soon after the launch as it had a bold looking design along with feature loaded cabin. Just like Hyundai Creta, there are several accessories available for Kia Seltos in the market and there are several videos available online where the base variant of the Kia Seltos SUV has been neatly modified into a top-end variant. Here we have a video where the base HTE variant of Kia Seltos gets customized interior along with 18 inch alloy wheels.

The video has been uploaded by VIG AUTO ACCESSORIES on their YouTube channel. In this video, the vlogger talks about all the modifications that have been done to the SUV. The owner did not wish to completely convert the car into a top-end model due to budget constraints. The car comes with the same matte black grille at the front. The vlogger installed a chrome garnish on it which gives it a higher variant like look. The headlamps remains the same. The projector unit now gets HID lights in the. A set of aftermarket LED fog lamps in the ice cube shape design have also been installed.

Coming to the side profile, the original steel rims on the Seltos have been replaced with 18 inch dual tone alloy wheels. This is the same wheel that Kia offers with Seltos X Line variant. The alloy wheel helps a lot in elevating the overall stance of the vehicle. The other changes on the side profile are the ORVMs. The base variant gets turn indicators on fenders. This has been removed and a chrome fender garnish has been placed here. The ORVMs was replaced with a unit from higher model which comes with integrated LED turn indicators and can be electrically adjusted and folded.

There are lower window chrome garnishes, roof rails, rain visors and lower door chrome garnish installed in this Seltos. A shark fin antenna and an original Kia Seltos spoiler has also been installed in the car. Other than this, no major modifications have been done to the exterior. Moving in, the interior on this Seltos have been customized. The car now gets Ice pearl and black dual-tone interiors. The door pads are wrapped in leather and there are buttons to adjust the ORVMs on the driver side door.

The fabric seat covers have been replaced and is now wrapped in custom made seat covers. The seat cover gets pattern inspired from the GT Line version. Steering mounted controls are now installed in the car and the Seltos is also equipped with an aftermarket touchscreen infotainment system. Damping has been done on all four doors and the windows get high infrared heat rejection clear films. Kia Seltos is available in three engine options. The 1.5 liter naturally aspirated petrol engine comes with manual and IVT gearbox options. The next engine option is 1.5 liter turbocharged diesel engine which comes with manual and 6-speed automatic transmission. The third engine option is the 1.4 liter turbo petrol engine which comes with 6-speed manual and a 7-speed DCT gearbox.