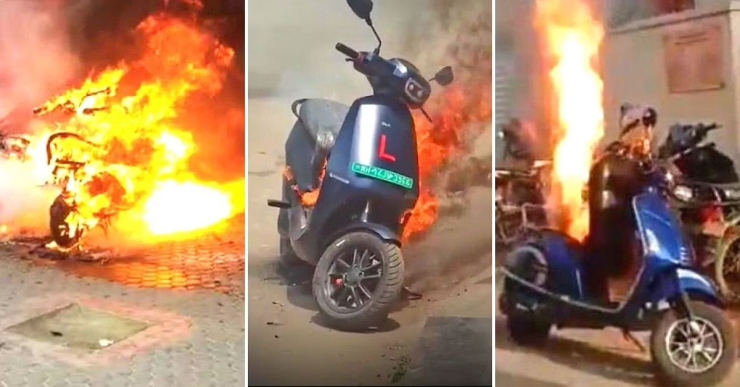 In March, the government launched a probe for finding the reasons behind the fires that we are seeing in electric scooters. Now, the first report is here and it says that the issue is with the battery cells and battery management system that controls everything. All three companies, Ola Electric, Pure EV and Okinawa were examined for the electric fires.

The government took samples of cells from the three companies to make further examine them. The final investigation report will be filed in the coming two weeks. India does test the battery packs but not the cells that are imported from other countries like China or South Korea. This is because of the lack of expertise and infrastructure.

Ola is working with the government on this issue and has also appointed an external agency. Their findings are completely different from what the probe has reported. The preliminary assessment suggests that the battery management system has no fault and the fire was caused because of an isolated thermal incident.

Ola Electric is sourcing its cells from LG Energy Solution which is a South Korea based company. The company said, “The Indian government’s report has not yet been released or shared with us. We cannot comment on the report as we have not yet identified the root cause of the Ola scooter incident in March” Having said that, the company is still working with Ola Electric to find the root cause of the incident.

Ola Electric has announced a recall of 1,441 S1 Pro electric scooters. This has been done as a pre-emptive measure. The recalled scooters are of the same batch as the scooter that caught fire. The manufacturer will be running a detailed diagnostic and health check-up of these scooters.

The incident happened in Pune and fortunately, no one was injured but the video went viral all over the internet. Ola Electric has said that their battery pack does comply with AIS 156 standards and it also complies with the European standard ECE 136.

Okinawa has recalled 3,215 units of their electric scooter which is called the Praise Pro. They were the first ones to issue a voluntary recall. They did this to check the batteries and fix the issues if there are any. The manufacturer said, “The batteries will be checked for loose connectors or any damage and be repaired free of charge at any of the Okinawa authorized dealerships pan India. We are working closely with the dealer partners to ensure that the repair experience is as per the convenience of its customers, for which the vehicle owners will be contacted individually,”

Pure EV has recalled 2,000 units of their electric scooter. The scooters that are being recalled are ETRANCE and EPLUTO 7G. The company will be performing various checks to the battery, charger and the system to find the fault. An 80-year old man died and three of his family members suffered burn injuries after a Pure EV scooter exploded.