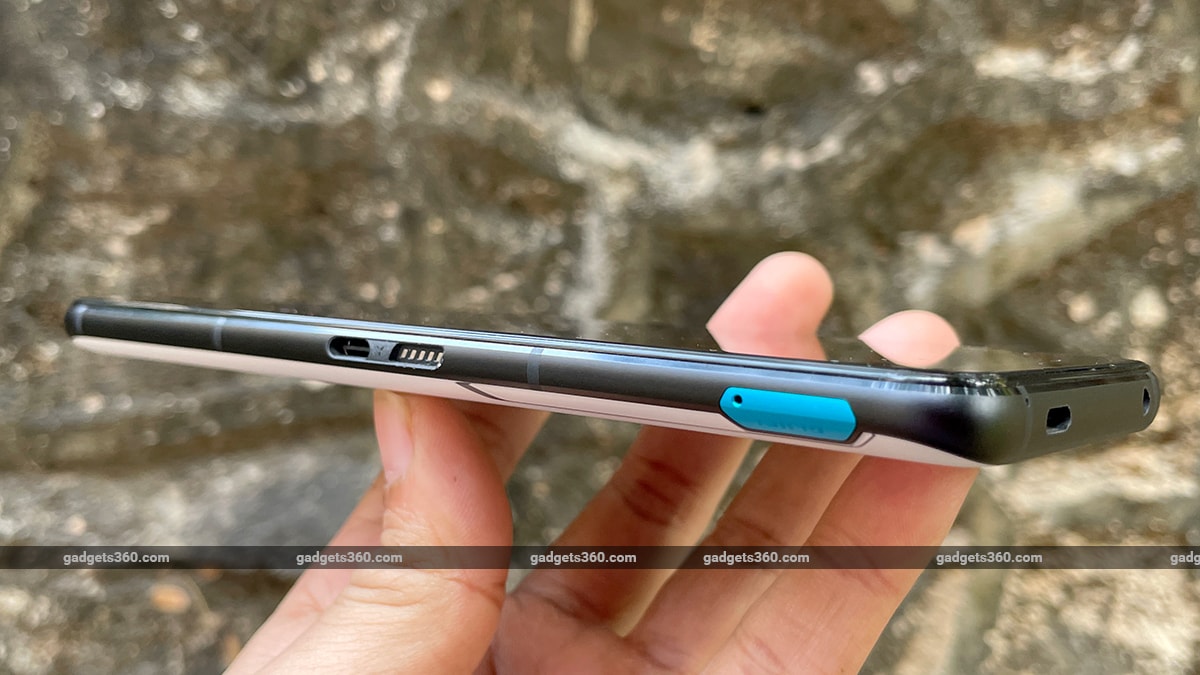 The Asus ROG Phone 5 Ultimate is a big device and does have a few design similarities to its predecessors. It has a big 6.78-inch display with a tall 20.4:9 aspect ratio. The borders on the sides are relatively slim but there are slightly bigger ones at the top and the bottom. Asus has neatly tucked a selfie camera into the space above the screen, and there are speakers at the top and bottom for stereo output in landscape.

The frame of the ROG Phone 5 Ultimate is made out of metal and has a premium feel to it. All the buttons are on the right side, with the power button almost exactly in the centre. The volume buttons are slightly higher and are easy to reach. There is also a microphone hole next to the power button. Asus has also implemented ultrasonic trigger buttons called ‘AirTriggers’ on the same side. The placement is excellent and my index fingers rested on them naturally when holding the phone in landscape to play games.

The left side of the ROG Phone 5 Ultimate has a Type-C port and a proprietary connector for ROG Phone accessories. This additional Type-C port can be used to charge the smartphone while gaming in landscape mode, so the wire doesn’t get in the way. Asus has covered these two ports with a detachable rubber flap. This SIM tray is also on the left, finished in a bright blue accent colour. It has two NanoSIM slots but there is no microSD card slot for storage expansion. There’s nothing at the top,  but the ROG Phone 5 Ultimate has an offset USB Type-C port at the bottom along with a 3.5mm headphone jack.

Asus has made the back of the ROG Phone 5 Ultimate using Corning Gorilla Glass 3. This smartphone does not have a metallic vent on the side like its predecessors, the ROG Phone 3 (Review) and the ROG Phone 2 (Review). There’s a triple camera module in the top left corner, which protrudes slightly. At the centre of the rear panel is a monochrome PMOLED display which lights up when the screen is on, and can be customised to show different graphics. It also shows alerts for incoming calls, and animates when a game is launched. There are two additional Air Triggers on the back which are within reach while holding the phone in landscape. The back panel has a matte finish which manages to hide fingerprints quite well.

The Asus ROG Phone 5 Ultimate sports a 6.78-inch AMOLED display with a 20.4:9 aspect ratio.This panel is HDR 10+ certified. It has a maximum refresh rate of 144Hz and a touch sampling rate of 300Hz. There’s also an in-display fingerprint scanner. The peak brightness is 1200 nits, and Asus has used Corning Gorilla Glass Victus for protection.

Asus has picked the Qualcomm Snapdragon 888 SoC to power the ROG Phone 5 Ultimate. It was the 2021 flagship processor from Qualcomm at the time of its launch and is still one of the most powerful SoCs in the market. This processor is matched with 18GB of LPDDR5 RAM and 512GB of UFS 3.1 storage, which might seem like overkill for most people. Given its hardware, the ROG Phone 5 Ultimate should be able to handle every title in the Google Play Store.

You get support for Bluetooth 5.2, Wi-Fi 6, six satellite navigation systems, and dual 5G as well as 4G VoLTE. This phone packs in a 6,000mAh battery that’s split into two cells of 3,000mAh each. The ROG Phone 5 Ultimate is capable of 65W fast charging but only comes with a 30W charger in the box.

The ROG Phone 5 Ultimate runs Android 11 with Asus’s own ROG UI on top. It had the November Android security patch at the time of this review. The ROG UI is customised to appeal to gamers, but if you want the stock Android look, you can switch to that in the Themes app. There are a few preinstalled apps such as Facebook, Instagram, Netflix, and Messenger. I did not encounter any spammy notifications during the review period.

Multiple gestures have been implemented, but not many are enabled by default. You can double-tap the display to wake the phone or put it to sleep. Smart Answering automatically answers an incoming call when you raise the phone to your ear. You can also trace certain alphabets on the screen to launch predefined apps.

Asus also preinstalls its own Armoury Crate app, which showcases all the games installed on the smartphone. A console screen shows parameters of the device such as storage, RAM, battery level, and system temperature. It also displays CPU and GPU clock speeds along with their temperatures. There are different power modes that can be selected in this app. “X Mode” dials everything up to eleven, giving you all the power this phone has to offer. “Dynamic” keeps power balanced with heat and battery life, while “Ultra Durable” focuses on conserving power.

The ROG Phone 5 Ultimate’s crisp AMOLED display had excellent viewing angles and was also bright enough outdoors, in my experience. The high refresh rate makes the UI feel buttery smooth. Asus has set this to Auto by default, which keeps it at 120Hz. You can manually bump it up to 144Hz or slow it down to 60Hz. I also found the stereo speakers on the phone to be loud, and they did not sound tinny at higher volume levels.

The ROG Phone 5 Ultimate pretty much bulldozes through any workload you throw at it. I played multiple games and multitasked with different apps, without any issues. During my review period, I had over 10GB of RAM free most of the time and never noticed any lag. The in-display fingerprint scanner and face recognition were snappy as well.

AirTriggers on the right side of the ROG Phone 5 Ultimate can be used while gaming.

Benchmarks helped put some perspective on where the ROG Phone 5 Ultimate stands compared to other smartphones in the market. In AnTuTu, it scored 837,004 points which is among the highest we’ve observed. In Geekbench 5’s single-core and multi-core tests, it scored 1,120 and 3,693 respectively. It maxed out 3DMark’s Sling Shot and Sling Shot Extreme graphics tests, and managed to hit 120fps and 56fps in GFXBench’s T-Rex and Car Chase scenes respectively.

I then loaded up Battlegrounds Mobile India (BGMI), and it defaulted to the High frame rate and HD graphics settings. I bumped the graphics quality up to HDR and the frame rate to Extreme. The Asus ROG Phone 5 Ultimate still ran the game at these settings without any lag or stutter.

I found the AirTriggers to be responsive and useful while gaming. You can also use the ones on the rear panel and the physical triggers on the AeroActive cooler for gaming. I played GBMI for 25 minutes and noticed an 8 percent drop in the battery level. The phone became slightly warm to the touch which was noticeable on the metallic frame. While playing games with the Aeroactive cooler attached, the phone stayed more comfortable, but the spinning fan did drain the battery quicker.

The ROG Phone 5 Ultimate has a triple camera setup on the rear. It has a 64-megapixel primary camera, a 13-megapixel ultra-wide-angle camera, and a 5-megapixel macro shooter. The primary camera captures 16-megapixel shots by default. I found the camera app to be pretty straightforward and easy to use. You can easily move between different shooting modes, and it also has quick controls for HDR, aspect ratio selection, the flash, and Google Lens.

The Asus ROG Phone 5 Ultimate has a triple camera setup

Photos taken with the ROG Phone 5 Ultimate in daylight appeared good at first. Colours were fairly accurate and objects at a distance were recognisable. However, on zooming in, I noticed grain in the output. The ultra-wide-angle camera captures a wider field of view but edges were distorted in the output. Photos weren’t as detailed as those taken with the primary camera, and artefacting was visible on zooming in.

The phone was quick to lock focus when shooting close-ups, and the output was sharp. It managed good separation for the subject and also added a depth effect to the background. Portrait shots had good edge detection and the phone did let me set the level of blur before taking a shot. The macro camera lets you get close to the subject, and managed decent shots too.

Low-light camera performance was good. The phone detected low light and automatically set itself to capture long exposure shots. It also showed how long the exposure would be, so I knew I had to stand still. This worked just like Night mode, and the output was identical. So while this helps capture photos at night without fiddling with the camera app, it does render Night mode redundant. Foreground subjects looked good, but objects at a distance were smoothened. Shots taken without the long exposure missed out on detail, especially in the shadows.

Selfies taken with the 24-megapixel front camera are saved at 6-megapixel resolution as a result of pixel binning by default. Shots taken in daylight were crisp and portrait selfies had good edge detection. Low-light selfies with a light source nearby were good.

Video recording tops out at 8K for the primary camera and 1080p for the selfie shooter. None of the cameras have optical stabilisation, and the phone stabilises video electronically. In daylight, videos shot at 4K had a little shimmer when walking around, though 1080p footage was well stabilised. Low-light video had a shimmer effect if recorded while walking, at 4K as well as 1080p.

The Asus ROG Phone 5 Ultimate is an all-out gaming smartphone with dedicated high-end hardware. Asus hasn’t cut any corners when it comes to performance, and some might also find 18GB of RAM overkill. The crisp high-refresh-rate AMOLED panel, stereo speakers, and capacitive AirTriggers make gaming more engaging on this smartphone. However, camera performance isn’t the best at this price, which could turn away people looking for an all-rounder.

If you want a purpose-built gaming phone and you don’t mind splurging, the ROG Phone 5 Ultimate is the best you can get in the market right now. It does not have any direct competitors but you can get much slicker flagship phones at this price. If you don’t want to spend Rs. 79,999, the base Asus ROG Phone 5 at Rs. 49,999 offers more value for your money.

Catch the latest from the Consumer Electronics Show on Gadgets 360, at our CES 2022 hub.

Best Deals on Popular Laptop Memory Modules for You to Consider