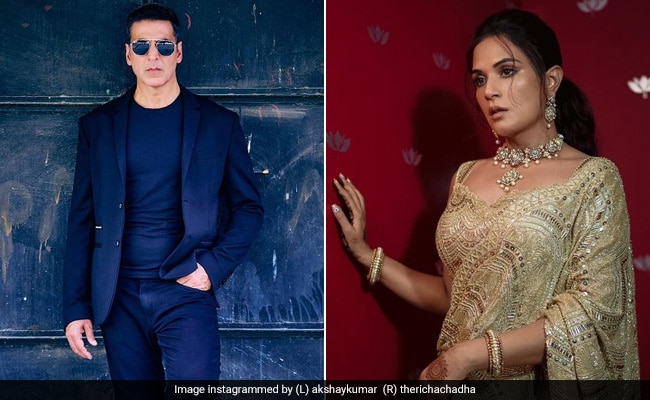 Bollywood actress Richa Chadha is facing trolls and criticism for her tweet on Galvan issues. On Tuesday, he tweeted a sarcasm on Northern Army Commander Lt Gen Upendra Dwivedi’s statements on Galwan, which didn’t go down well with many and he trolled Richa Chadha. Now Bollywood actor Akshay Kumar has jumped into this whole matter. He has severely criticized Richa Chadha. Along with the aspirations of the Indian Army.

Retweeting Richa Chadha’s sarcastic tweet on his official Twitter account, Akshay Kumar wrote, ‘It is sad to see this. We should never forget our gratitude towards our army. If they are then we are today. Akshay Kumar’s tweet is becoming increasingly viral on social media. Many social media are giving their reaction on Twitter. Let us tell you that on Tuesday, Northern Army Commander Lieutenant General Upendra Dwivedi had said that the Indian Army is ready to take back PoK and is just waiting for the government’s orders. Quoting this statement, the actress wrote on Twitter…. ‘Galwan hi keh raha hai’…

Sad to see this. We should never be ungrateful towards our armed forces. He is so we are today. pic.twitter.com/inCm392hIH

Richa Chadha, who is very popular in the world of social media, had no idea what people became of her. Otherwise maybe she would have thought thousand times before tweeting like this. People got agitated after seeing this post of Richa Chadha on social media. Many have described this post of his as “embarrassing and disrespectful”. Not only did he delete his tweet after a lot of protest, but he joked with everyone for such a tweet.

On the outbreak of measles, the doctor of KJ Somaiya Hospital said – the condition of many children is still bad.